RAMBO of the Carracas Mesa: A History of the Jicarilla Mustangs and Mustangers

Farmington Civic Center
The San Juan County Historical Society, a 501(c) (3) public charity, will present the premiere of a locally produced film, “RAMBO of the Carracas Mesa: A History of the Jicarilla Mustangs and Mustangers,” as a fundraiser and community event. The film was written and produced by Laura Walters Harper.

More than three years ago, Laura Walters Harper began work on a film script about her once-wild mustang, Rambo. As she delved into his life, she found Rambo’s story connected the evolution of the horse to New Mexico’s history and her own life here in San Juan County. Laura discovered that the horses used by the Conquistadors more than five hundred years ago to traverse New Mexico had an ancient bloodline that is found here today. Amazingly, a 2013 genetic analysis conducted by Dr. E. Gus Cothran, Department of Veterinary Integrative Bioscience, concluded the Old-World Iberian breed is conclusively a genetic marker present in the Jicarilla mustangs of Northern New Mexico and Rambo’s DNA as well. By tracing the mustangs’ bloodline, a wonderful history of New Mexico—its wild horses and its people— is revealed and vibrantly retold in Laura’s film, “RAMBO of the Carracas Mesa: A History of the Jicarilla Mustangs and Mustangers.”

The film features local families that represent the diverse culture of Northern New Mexico and their personal relationships with the Jicarilla mustangs. It is through their individual stories that we learn the Jicarilla mustang’s historic value to Northern New Mexico’s culture. The documentary concludes with the idea that by joining nature, horsemanship, community, science, and technology, there is a future for the mustangs here in San Juan County. 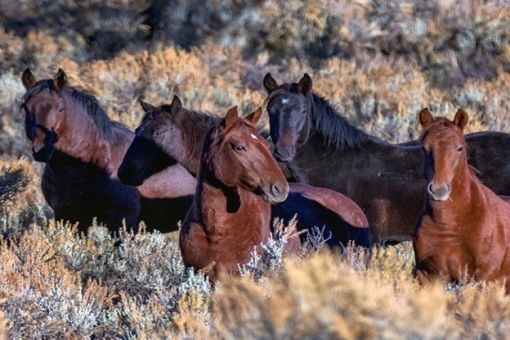