The Broadening Horizons lecture is the first of two being held in conjunction with the San Juan College Indigenous Peoples’ Day celebration.

Many of the Navajo population are unable to obtain enough clean water, which in turn creates a cycle of poverty and limits health, happiness, educational opportunities and economic security. McGraw will discuss the DIGDEEP project and how the organization is working to make a difference by implementing new initiatives – from engineering new wells to installing home water systems.

McGraw is an avid speaker and writer, and has served as a guest lecturer at universities around the world. He has been published by the New York Times, the Huffington Post and several law reviews; he has been profiled by NPR, Vice and CBS News, and has spoken at events hosted by the Clinton Foundation, WeDay, the World YMCA, and Ford.

He was recently named one of the 17 "Local Globalists" by the UN Foundation and an "Under 40" by Rare.us. McGraw holds a Master’s degree in International Law and Conflict Management from the United Nations University for Peace in Costa Rica.

The lecture is free and open to the public. 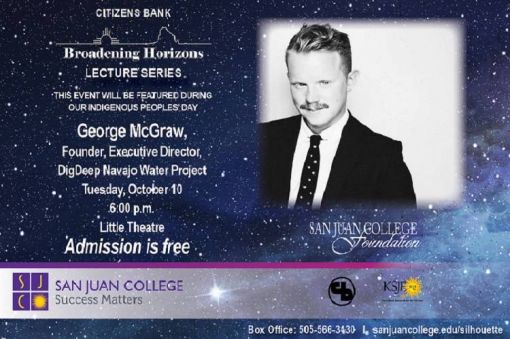