Farmington Public Library
Don't miss out on this visit from Ramona Emerson as she discusses her her first novel, Shutter. She will also be on-hand to sign copies of the book!

The Farmington Public Library is excited to welcome Ramona Emerson to discuss her first novel, Shutter. Shutter is her blood-chilling debut set in New Mexico's Navajo Nation and is equal parts gripping crime thriller, supernatural thriller, and poignant portrayal of coming of age on the reservation.

Ramona Emerson is a Diné writer and filmmaker originally from Tohatchi, New Mexico. She has a bachelor’s in Media Arts from the University of New Mexico and an MFA in Creative Writing from the Institute of American Indian Arts. After starting in forensic videography, she embarked upon a career as a photographer, writer, and editor. She is an Emmy nominee, a Sundance Native Lab Fellow, a Time-Warner Storyteller Fellow, a Tribeca All-Access Grantee and a WGBH Producer Fellow. In 2020, Emerson was appointed to the Governor’s Council on Film and Media Industries for the State of New Mexico. She currently resides in Albuquerque, New Mexico, where she and her husband, the producer Kelly Byars, run their production company Reel Indian Pictures. 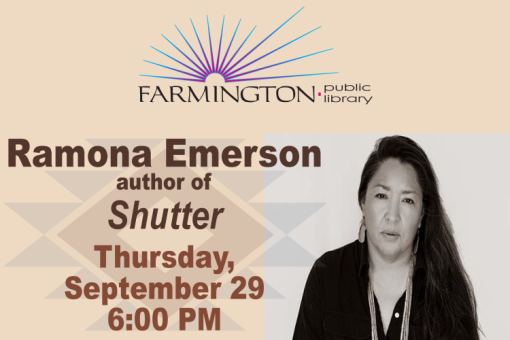