Thousand Cranes presents the true and poignant story of Sadako Saski, who was two years old when the atomic bomb was dropped on the small city of Hiorshima. Twelve years later, Sadako discovers that she has leukemia, an effect of the bombing. Her friend suggests that if a sick person folds a thousand origami cranes, the gods will grant her wish to make her healthy.

Sadako folds hundreds of beautiful, colorful paper cranes and calls to the spirit of her grandmother. As if in a dream, Sadako folds a giant crane that comes to life and flies them to the mountain of her ancestors. She died on October 25, 1955.  In 1958 a statue was unveiled in Hiroshima Peace Park in her honor. Each year on August 6, the anniversary of the bombing, thousands of people bring paper cranes to adorn the statue. 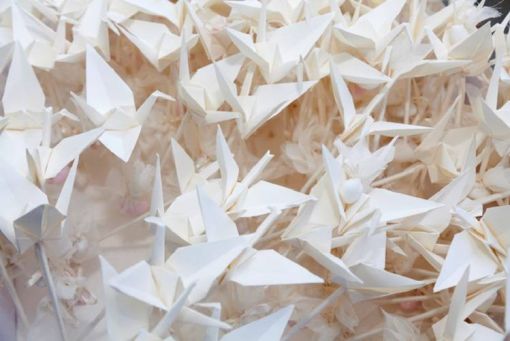