Farmington Museum & Visitor Center
2020 marked the centennial of the ratification of the 19th amendment, giving women the vote in the United States. Inside Out: Women's Status and Roles from Foundation to Silhouette, provides an overview of women in America over the past 100 years. Outfits featured within the exhibit include ensembles worn by Dolly Madison, Grace Kelly, Selena, Kim Kardashian, Lady Gaga, and more iconic women that have exhibited strength, femininity, and power through fashion. Exhibit in Farmington through January 17, 2021.

2020 marked the centennial of the ratification of the 19th amendment, giving women the vote in the United States. Inside Out: Women's Status and Roles from Foundation to Silhouette, provides an overview of women in America over the past 100 years. Outfits featured within the exhibit include ensembles worn by Dolly Madison, Grace Kelly, Selena, Kim Kardashian, Lady Gaga, and more iconic women that have exhibited strength, femininity, and power through fashion.

Inside Out explores the perceived roles of women in American society as they have changed over time, and how these roles have shaped—and been shaped by—what women wear. It also explores feminist ideas and movements since the nation’s earliest days and the significant role undergarments have played in those movements.  Inside Out traces the silhouette of stylish American women over the centuries, and the design, intention, and transition of women’s undergarments which have helped create these silhouettes.

Inside Out The Exhibit

This is a traveling exhibit about American women. It is about how women have shaped American society, and about the undergarments that have shaped them. The exhibit explores three central themes: (1) The perceived roles of women in American culture as they have changed over time, (2) feminist ideas and movements since the nation’s earliest days, and (3) the significant role of undergarments relative to those movements and the outward appearance and silhouette of stylish American women over the centuries.

Chapter 1: The Federalist Period - Revolution and Freedom: Clothing and the American Identity
More relaxed, perhaps, but still fashion-conscious, American women adopted the European fashions that followed the French Revolution, taking inspiration from Classical ideals and in lighter materials and colors. First Lady Dolley Madison (1809-1817) was the celebrity fashionista of the period and helped America keep up with the latest trends.

Chapter 2: The Victorian Period 1850-1900 - Structurally Engineering the Female Silhouette
“Build it big” was a goal of the Victorians, and their ideal female silhouette was no less a feat of structural engineering than the Eiffel Tower, the Crystal Palace, or the Brooklyn Bridge.  First, reinforced corsets were required for the perfect hourglass figure. Then, to properly fill out the dress, elaborate contraptions made of wire, wood, spring coils, horsehair, and any other type of stiff material were layered on over the corset!

Chapter 3: The Roaring 20s - Upheaval and the Jazz Age
The effects of World War I changed attitudes and everyday aspects of people’s lives. Gone were the stuffy clothes and regimented schedule. The new style was loose, drop-waist dresses, and the desired figure was more boyish. The hourglass corset and multiple layers of underpinnings were replaced with a bra and pair of light, baggy knickers or a combination garment called a cami-knicker.

Chapter 4: The War Years 1941-1945 - Women in the Workforce
Emerging from the Great Depression, America entered World War II. Women entered the workforce and the war effort in large numbers. Undergarments did not change much from the 1930s, but women working in factories and in auxiliary military roles demanded less constrictive and more supportive undergarments. During WWII, women proved that they could do anything—fly planes, build ships, wire electronics, fix cars, decode enemy transmissions, and even play professional baseball.

Chapter 5: The 1950’s - Grace Kelly and Housework in Heels
In a decade’s time, the American woman went from riveting to vacuuming. Men returning home after WWII resumed their jobs and women went back to working in the home. Utility-based clothing was no longer needed. In the post-war years, a new, glamorous, hyper-feminine ideal emerged, inspired by Christian Dior’s “New Look.” This new ideal of feminine beauty was presented in a range of looks, from the provocative sweater girl to the elegant film actress Grace Kelly and dutiful fictional TV mom June Cleaver.

Chapter 6: The 1960s and 1970s - Counterculture and Feminism
Women aggressively challenged previous ideals of feminine duty, beauty, and sexual norms. The widespread use of corsets and girdles came to an end and suddenly there were more choices: Heels or flats, miniskirt or long billowy dress. The protest of the 1968 Miss America Pageant in Atlantic City was a major milestone in the women’s liberation movement. Protestors decried the pageant as being both racist and misogynistic, setting out the Freedom Trash Can, into which women were encouraged to toss bras, girdles, fashion magazines, curlers, high heels, and “other instruments of torture.”

Chapter 7: The 1980s and 90s - The Mtv Era: Underwear or Outerwear?
The idea of underwear as outerwear became mainstream fashion. Women fought to break the glass ceiling wearing lacy bustiers under power suits, and also began fighting back against sexual harassment in the workplace. The bright, color-block designs, bold geometric shapes, and wide, padded shoulders, worn together with short skirts and bra tops, of popular 80s and 90s fashions exuded confidence and ambition coupled with unashamed femininity.

Chapter 8: The Contemporary Age - What Goes Around, Comes Around
Design combinations of the last two hundred years have been incorporated into the popular fashions of today. Women are faced with an overwhelming array of choices, ranging from no underwear at all to androgynous cotton briefs, to constrictive shape-wear and waist-training corsets. The female silhouette we see in popular media and advertising is surgically, mechanically, and digitally manipulated. Nevertheless, women have never been so free to choose what they wear. 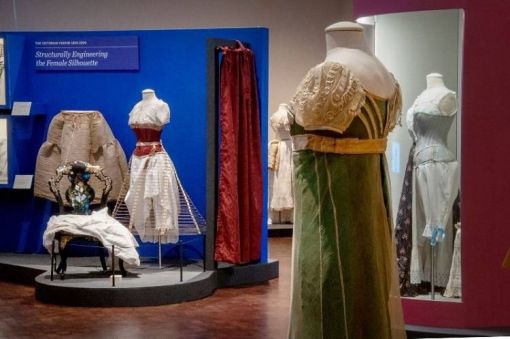 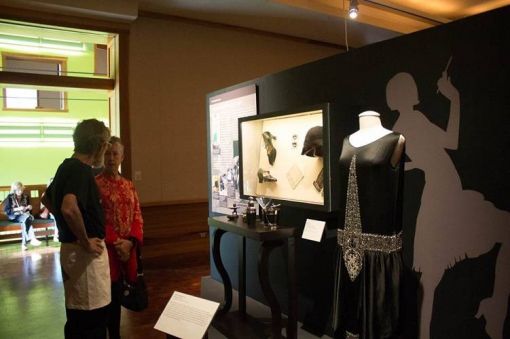 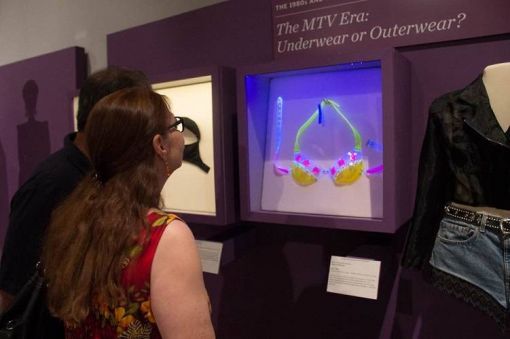 Sacred Rebel Yoga Studio is closed at this time.  Learn more by visiting their website, join them on Facebook or check them out on the MINDBODY app.