Chokecherry Canyon
VOTED A JOLT WORTHY EVENT! Explore the dark sky of Chokecherry Canyon. Four Corners Explorers will be offering enchanting evenings with sunsets and star gazing on select nights this summer. Experience a Blue Moon, Summer Solstice and the Perseid Meteor Shower with expert guided tours. Stargazers, photographers and adventure seekers will not want to miss this one of a kind opportunity.

Enjoy star gazing and a thrilling ride into Farmington's famous off roading recreation area, Chokecherry Canyon. Four Corners Explorers will lead the tour into Chokecherry Canyon for the optimal viewing locations of each event. The ride in and out will be just as thrilling as the astonomical events!  Drivers will be provided for each tour, or you may rent and drive a UTV yourself.  Visit fourcornerexplorers.com/other-adventures  to book your seats! 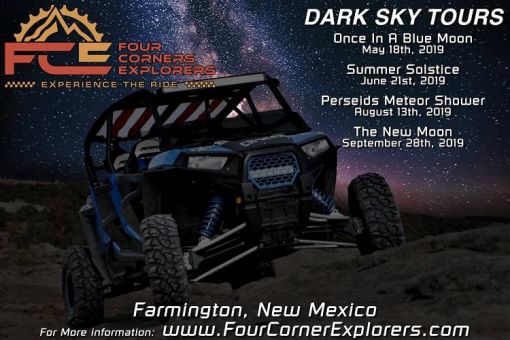