Chautauqua-Ramamuri: The Foot Runners of the Sierra Madra

Raramuri, Uto-Aztecan for Tarahumara, are among the world’s best runners from lives spent traversing the canyon walls and plateaus of the Sierra Madre in northern Mexico. In a personal narrative, complemented by anthropological ethnographic and scientific research, Diana Molina will feature the exceptional Raramuri culture, discuss the impact of modern society on their lifestyle and highlight the amazing expanse of the canyon environment with stunning photographs taken while living among the tribe for extended periods of time.

Diana Molina is a professional photographer and writer who lives in southern New Mexico’s Mesilla Valley. Her sociological essays have appeared numerous magazines and journals including Elle, Esquire, National Geographic Traveler, Vogue, Texas Highways, and New Mexico Magazine. She has exhibited her photography and works of art in exhibits in universities and museums throughout the Southwest. 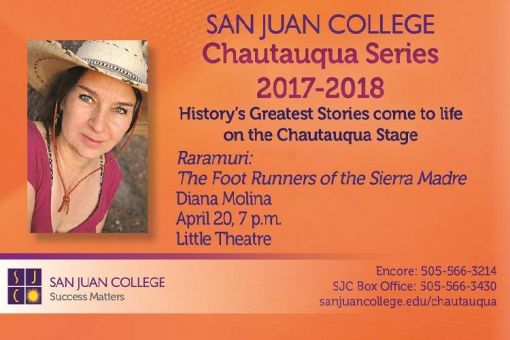